For the first time in almost fifteen years, my Twitter acount got suspended. 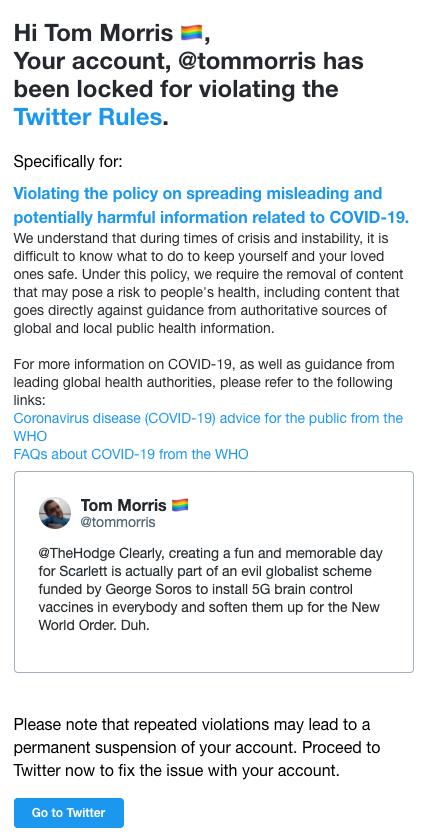 Here’s the backstory: my friend Dom and his wife Heather decided to put on a surprise “lockdown holiday” for their lovely daughter Scarlett. They put photos up of it as a Twitter thread.

As with a lot of the weirder things Dom gets up to, it ended up getting press coverage on the BBC News website. And said press coverage was then reposted to the BBC News Twitter feed. Despite the longstanding injunction to “not read the comments”, I read the comments and found a bizarre number of people who, before the rise of social media, would be sitting at home writing green ink letters to newspapers. My friends, who were simply doing something fun for their daughter, were accused of being part of a government propaganda plan to convince people that lockdown is actually fine.

I’ve been called a lot of things but never BBC propaganda so that’s new! @thehodge

So I do what I’m almost obliged to do in such a circumstance: take the piss.

Clearly, creating a fun and memorable day for Scarlett is actually part of an evil globalist scheme funded by George Soros to install 5G brain control vaccines in everybody and soften them up for the New World Order. Duh.

If your brain is functioning normally, this is clearly satire. The rhetoric of Alex Jones, David Icke and Kate Shemirani blended together and amped up to the point of absurdity, with the token nods to the usual absurd villains of every conspiracy theory: the globalists, the New World Order and Soros. The absurdity of it comes from the fact it is about my friends, who I’m am as certain as I can be are not being paid by George Soros to get people to install 5G brain control vaccines to soften them up for the New World Order.

I took a screenshot. I laughed at the absurdity of it, deleted the tweet, and waited the 12 hours. No, my human rights have not been infringed. I’m not going to take it all the way to the Supreme Court or to Strasbourg, or bang my fist in anger about Magna Carta and the ancient liberties of free Englishmen. I’m not even going to describe how Big Tech have cancelled me and demand interviews with every broadsheet and broadcaster in the country.

It isn’t a conspiracy, it is just a computer being bad. I’m a software developer—I know computers are terrible.

Then I went back on Twitter. Propaganda spouting idiots are still spreading COVID-denialist or antivax propaganda unchecked. Many of those spreading such idiocy have verified accounts and work for media outlets. No bans are forthcoming for the real propagandists—the over-the-top pisstakes are far easier to spot.

Maybe, just maybe, someone might learn from this that automatic, AI-based moderation doesn’t work. I wouldn’t bet on it though.