It should be fairly apparent to anyone who has lived through the Brexit referendum that the attention spans of both politicians and journalists in the UK is quite limited even at the best of times. The UK’s handling of the legalities of the COVID-19 crisis shows this in spades.

What are the rules?

You should go read them. They aren’t that hard to read, even if they have some fairly significant problems.

Regulations 1 and 2 are just formalities. Regulation 3 sets out the period when the rules are reviewed (every 21 days).

Regulations 4 and 5 are concerned with closing and restricting businesses. The businesses which need to close are specified in Schedule 2. The two regulations contain specific provisions for particular types of businesses, including whether mail-order businesses can continue fulfilling orders, and what churches and other houses of worship can do during the restrictions.

The core restriction we should be concerned with is in Regulation 6: Restrictions on movement.

Regulation 6(1) sets out the rule clearly:

During the emergency period, no person may leave the place where they are living without reasonable excuse.

For the purposes of paragraph (1), a reasonable excuse includes the need—

(b) to take exercise either alone or with other members of their household;

(c) to seek medical assistance, including to access any of the services referred to in paragraph 37 or 38 of Schedule 2;

There are a great many more listed. The key word there is “includes”. This establishes there may be reasonable excuses that are not on the list.

If you leave the house intending to “obtain basic necessities” and you go to your local shop and there are no basic necessities available, so you buy an Easter egg, a bottle of whiskey and their entire supply of Wine Gums, you are legally in the clear.

There are some distinctly weird things in the list, including:

(h) to fulfil a legal obligation, including attending court or satisfying bail conditions, or to participate in legal proceedings;

You can sort of see what they are going for—attending court, satisfying bail conditions or participating in legal proceedings are all “legal obligations”. But so is going to work or fulfilling a contract, or indeed fulfilling other private rather than public legal obligations. The class of legal obligations is quite a broad one.

If someone wished to be very pedantic, a person (let’s use the traditional nomenclature of cryptographers) called Alice could pay her friend Bob £1 to bring her an exciting textbook on elliptic curve cryptography sitting on Bob’s bookshelf, and lend it to her for the duration of the COVID-19 lockdown. This is a legally binding contract. Bob driving to Alice’s house to deliver it amounts to his performance of a legal duty.

The government have, by including subparagraph (2)(h) in Regulation 6 made it so Bob can leave the house since fulfilling a “legal obligation” amounts to a “reasonable excuse”, as the drafter of the legislation included it on the list of reasonable excuses.

Obviously, they probably don’t mean that. In which case, they should have not written it like that. Generally this is why legislation gets debated in Parliament–to stop really silly things becoming law. Oh well, nobody is perfect.

So the law is crap?

It certainly has some deficiencies. But those are the rules. The point of the rule of law is we are bound by the rules set out in law. Not the statements of government ministers, not by “guidance”, and certainly not by social media posts. The law has the coercive power of the state behind it and is supposed to be clear and definitive. It sets the baseline for behaviour. Most people try to exceed that minimal baseline—that’s why the law and ethics are different things. But when it comes to the government and the police enforcing people’s behaviour, that’s what the law is supposed to set out.

The law may be complicated, and you may need a bit of help reading it. But it is (mostly) right there on the Internet on a rather spiffy website called legislation.gov.uk.

It would be against some fairly fundamental principles of how our society works if the police were to go around enforcing something other than the law. If the law does not properly reflect the public health requirements—which ARE totally legitimate—then the government have the ability to change the regulations to better reflect those requirements.

But if the law does not make something illegal, you can’t go around punishing people for not following it.

What’s the government saying then?

This is from the UK Government’s tweet announcing the new emergency measures. (And let’s not even start on the inaccessibility of text-in-videos-in-tweets.) 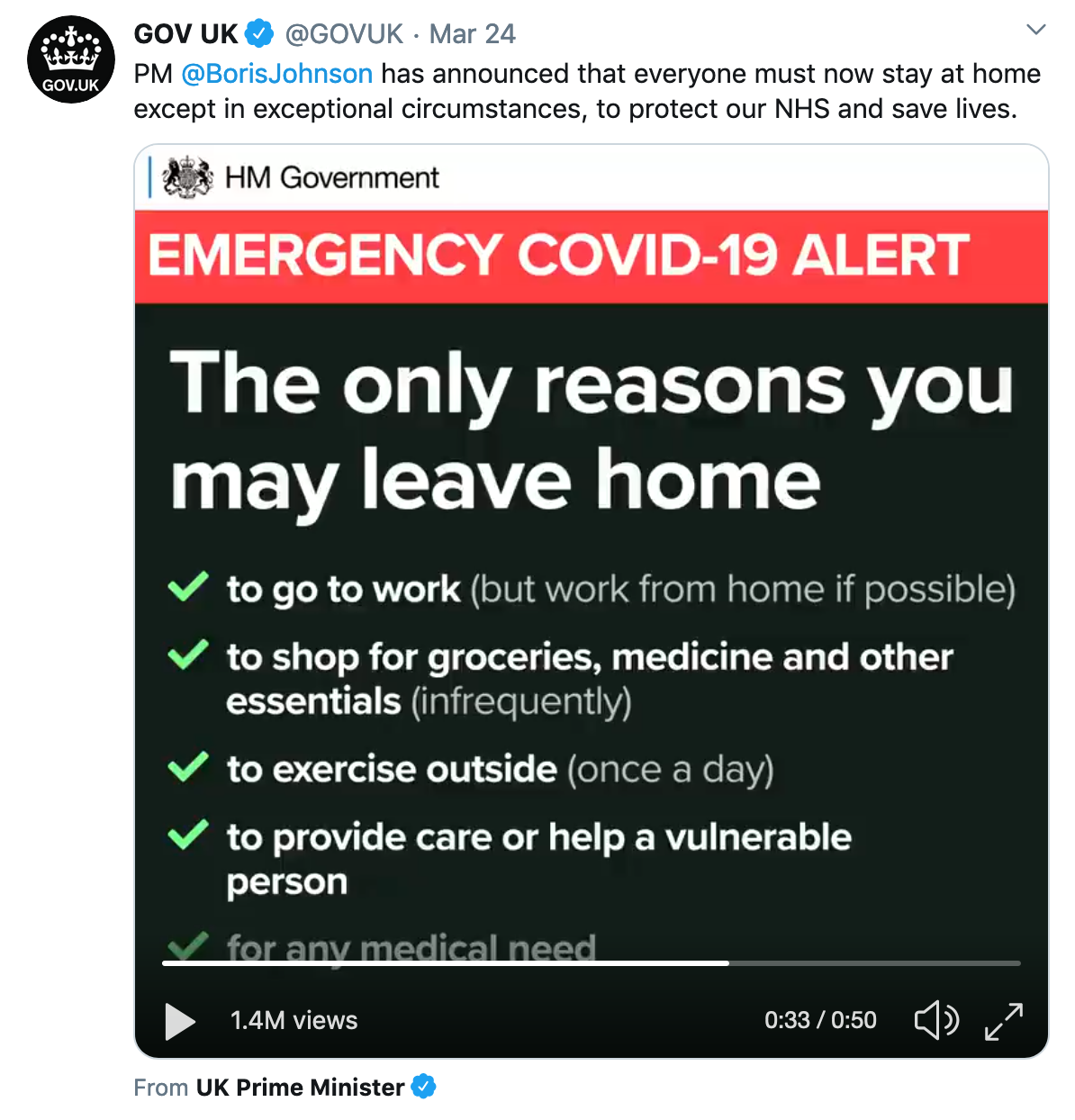 The only reasons you may leave home

✅ to go to work (but work from home if possible)

✅ to shop for groceries, medicine and other essentials (infrequently)

✅ to exercise outside (once a day)

✅ to provide care or help a vulnerable person

✅ for any medical need

“Well”, you might say, “that’s just a tweet! Social media is throwaway bullshit, mere stuff and nonsense, you are expecting too much even from our government to get the law right on Twitter, of all places.”

Question 15: “What will happen to me if I break the rules?”

We appreciate all the effort people are putting into containing the spread of coronavirus which will help protect our NHS and save lives.

However, if you leave your home or gather in public for any reason other than those specified, the police may…

This is followed by a list of all the powers the police have to enforce the law.

It is not true that if you “leave your home… for any reason other than those specified”, the police may punish you accordingly. You are allowed to leave your home with any “reasonable excuse”. The list of reasons given in the Regulations is non-exhaustive.

For good measure, this legally incorrect and misleading wording is being repeated by the government on Twitter and on Facebook.

Avon and Somerset Police have put up posters that wholly misrepresent the regulations. They claim in said posters that you are only “entitled to exercise once daily” (untrue), and the “restrictions… DO NOT permit you to use your vehicle to travel… to exercise” (completely untrue).

The Evening Standard reported that 500 BTP officers were deployed in London “to remind Tube and rail passengers of [the] non-essential travel ban”. There isn’t a “travel ban”.2 There’s a ban on leaving the house without a “reasonable excuse”. You cannot know from a person driving a car, or indeed, sitting on a train or bus, whether they have a “reasonable excuse” or not except perhaps by interrogating them. A “travel ban” or a closure of trains or the Underground would be ridiculous too, since the key workers needed to staff London hospitals and other public services now live many, many miles away from their workplaces thanks to the astronomical London house prices.

The police in Derbyshire used a drone to go film dog walkers in the Peak District. 26 seconds into the video, they caption the video “Walking Your Dog in the Peak District - not essential”. A few seconds later, the caption reads “Going for a walk miles from home - not essential”. Other things it labels as “not essential” include “going out of your way for an Instagram snap”, “driving to a beauty spot for a stroll”, “heading to the peaks to watch the sunset”.

If Public Health England think that coronavirus is likely to be transmitted by dog walkers taking their dog for a walk in the Peak District rather than closer to a person’s home, they can amend the legislation to that end. I think the scientists might be a bit busy on other matters to spend much time working out how exactly selfie-taking is going to affect a person’s chances of catching or transmitting the virus, but if selfie-taking (or perhaps posting on Instagram?) really is a vector for COVID-19 transmission, I’m sure the Regulations can be suitably modified to forbid selfie-taking or Instagramming. Having to spell it out in words would, in a rational society, demonstrate the complete absurdity of it. Quite simply, no law was broken and that should mean it is not a police matter. Derbyshire Police got lots of retweets for their cool drone video though, and that’s almost as good a use of police time and resources as catching criminals.

The rule of law matters

The case of the woman who was arrested while “loitering between platforms” at Newcastle station demonstrates the absurdity of the police’s behaviour during the coronavirus crisis. I have been known to “loiter between platforms” at train stations—generally, this is what one does while waiting for a train. She was arrested, and convicted in abstentia without even uttering a word. At no point did the police conclude that someone who seemingly could not confirm their own name or address or instruct a duty solicitor might not be fit to plead, and did not seek any kind of mental health assessment. Once the “emergency powers” bug bites, the vulnerable are always going to end up being the victims.

Part of the point of the rule of law is the police and government operate based on rules that are written down, which we can read and inspect and think about for ourselves. Police officers and the criminal justice system enforce laws, not vague guidance or statements made by politicians in media interviews, and certainly not bloody tweets. If it isn’t written down in law, you can’t be punished for failing to follow it. We expect a much higher standard of clarity as to what is and is not illegal, especially if there is a criminal penalty attached. If the law doesn’t match up with the public health guidance, the government can and should change the law to make the law clearer (and there is plenty of scope for it).

The government’s own public statements have failed to clearly distinguish between what is law and what is public health guidance. As the weeks of lockdown turn into months and we all settle down for the long haul, blurring the lines between law and good sense will not increase people’s respect or obedience of either.

This post attracted considerably more attention than I predicted, and the referrer logs and social media posts about it indicate a considerable number of conspiracy-theory-minded people are sharing it. This post is not an endorsement of your paranoid ideas. You absolutely should maintain social distancing, and you should comply with the law and the guidance to the best of your ability. Physical distancing, working from home as much as you can, and listening to actual experts is the best chance we have of preventing vulnerable people from catching and dying from this illness until we can finally sort out a cure or a vaccine.

The emergency provisions are a proportionate, legal and justified response to a genuine public health emergency, and they are compatible with the Human Rights Act 1998. I do not question the necessity of the government acting. I want the government to do the best job it possibly can in this crisis. It is unfortunate that they are not doing so. Don’t get your legal, scientific or medical knowledge off YouTube or David Icke or any number of other nonsense peddlers, pointless contrarians, and charlatans. Don’t give your money to fools bringing misguided crowdfunded lawsuits “to fight for our freedom” etc. Don’t forgo actual medical treatment for homeopathy or vitamin pills or some nonsense an Instagram influencer wants to sell you.